The goal of all analytical reference material is to monitor the accuracy of analyses for the elements being sought, without the concern of external factors influencing the laboratory results. All analytical methods suffer from some form of interference depending on the concentration of other elements in the sample matrix. Especially concerning is the possibility of standards contaminating the actual samples that follow the standards.

For instance, there is documented evidence of high arsenic in commercial standards contaminating samples that actually contained only background concentrations of arsenic. Reference material that is manufactured from actual ore that closely matches the samples being submitted will mitigate this possibility. The standards will behave as a regular sample during the dissolution process, and the instrument finish will not have to be adjusted to account for the standard samples containing a different matrix. 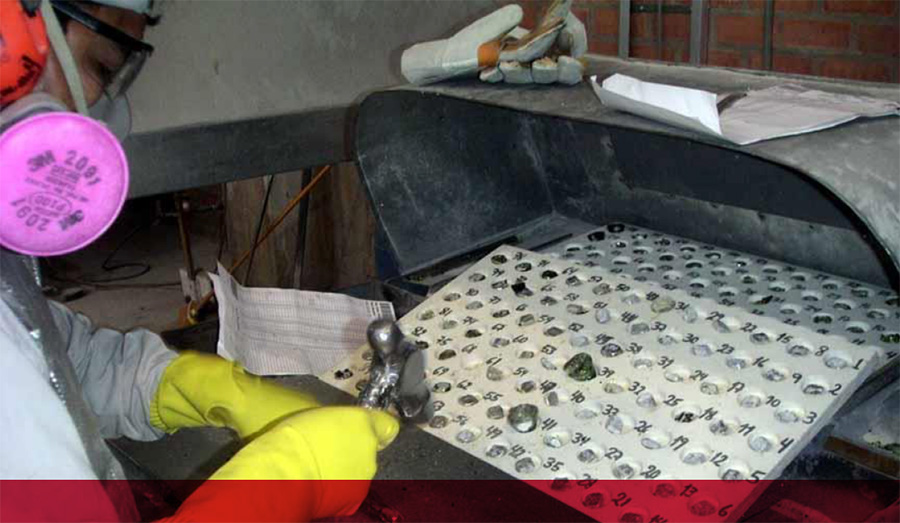 CDN prepares all reference material using the same methods as the commercial laboratories: pulverizing to 85-90 % passing 75 microns. The coarse material is then screened out, thus removing possible “nuggets” larger than 75 microns, but not re-grinding the sample to artificially decrease the mean grain size of the material. During the digestion process, either with acid or by fusion, the standards will behave exactly as a normal sample. This is quite different from other commercially available standards, who all pulverize and air classify their material to at least less than 54 microns, thus introducing a grain- size bias when compared to normal samples.

Some commercial companies argue that their standards are almost perfectly homogenized, thus producing an extremely low standard deviation (SD) as derived from a round robin consensus test. However, by definition, a SD is derived from assuming a “normal” bell shaped distribution where 1 in 20 analyses will fall outside of the 2 SD limits, i.e., there should be standard results that fall outside of the 2 SD limits. If there are no failures, something is statistically wrong with either the method of calculating the SD, or the laboratory.

This website uses cookies to improve your experience while you navigate through the website. Out of these, the cookies that are categorized as necessary are stored on your browser as they are essential for the working of basic functionalities of the website. We also use third-party cookies that help us analyze and understand how you use this website. These cookies will be stored in your browser only with your consent. You also have the option to opt-out of these cookies. But opting out of some of these cookies may affect your browsing experience.
Necessary Always Enabled

Performance cookies are used to understand and analyze the key performance indexes of the website which helps in delivering a better user experience for the visitors.

Analytical cookies are used to understand how visitors interact with the website. These cookies help provide information on metrics the number of visitors, bounce rate, traffic source, etc.

Advertisement cookies are used to provide visitors with relevant ads and marketing campaigns. These cookies track visitors across websites and collect information to provide customized ads.

Other uncategorized cookies are those that are being analyzed and have not been classified into a category as yet.